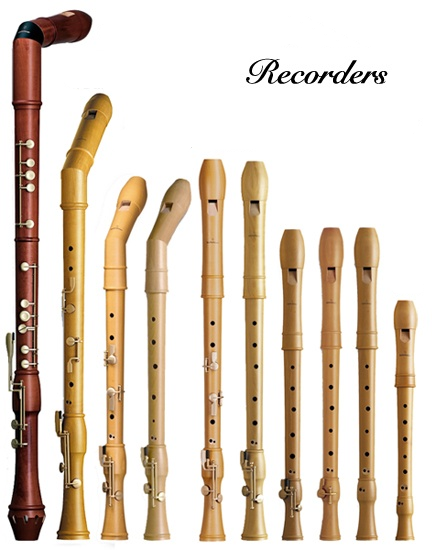 The recorder is a member of the flute family of woodwind musical instruments. Prehistoric flutes made from animal and bird bones have been discovered in Europe dating from up to 60,000 years ago. They are the earliest attested melodical instruments – although it is likely that prehistoric percussion instruments, such as two sticks banged together, may have preceded them.

Prehistoric flutes were very simple in appearance, but were able to play sophisticated tunes. In the video that is linked to below, a reproduction of a prehistoric flute is used to play haunting renditions of Beethoven’s “Song of Joy”, Dvořák’s “New World Symphony”, and various other comparatively modern pieces:

The ancient Greeks and Romans had their various forms of flute, which are depicted in the paintings and referred to in the literature of that period. Likewise, the northern Europeans had their own flutes. The sound of a Viking-era bone-flute with only three finger-holes has been attempted here:

An Iron Age predecessor of the type of flute known as a recorder was found in West Yorkshire and is now in the Leeds Museum. The modern instrument is essentially an open tube of an established length, with nine finger-holes drilled in it. At the top end there is a “windway” into which the player breathes. This forces air over a “fipple”, or wedge-shaped notch, causing the airflow to vibrate. The actual notes that sound are determined by the number of holes that are covered by the player’s fingers.

By the Renaissance, recorders were often played in “sets” or “consorts” of three, four or five different sizes, the shorter tubes producing notes in a higher range and the longer ones producing deeper tones. Only one complete early set survives anywhere in the world, in the museum of Chester. This is fitting, for as The Oxford Companion to Music comments, “The [modern] recorder may have been of English origin, and the English instruments were famous on the Continent.” Praetorius in 1619 describes eight different sizes of recorder, and Mersenne in 1636 adds a ninth, even longer, instrument which needed pedals to operate the lowest notes.

By the time of Henry VIII, who became king in 1509, English musicians were experts in the recorder. Henry’s father is twice reported to have paid the princely sum of 20 shillings to recorder players. Henry himself was a virtuoso player and composer who owned a collection of seventy-six recorders. Other composers who wrote for the recorder included Handel (four sonatas), Purcell and Telemann. Two of Bach’s Brandenburg Concertos employ the recorder, which was at that time usually called, simply, the “flute”. (Later it became necessary to distinguish between the “flute” that we call a recorder today and the transverse “flute” that led to the modern orchestral instrument of that name. They were then sometimes spoken of as the English flute and the German flute.)

Our great national poet, Geoffrey Chaucer (c. 1343 – 1400) refers to his Squire as “syngynge or floytinge al the day”, and given the way the word was used at that time the Squire seems to have been playing a recorder. Other authors who mention the instrument in their works include John Milton, Samuel Pepys and William Shakespeare. The latter may have been present at the great reception for Elizabeth I at Kenilworth in 1575, at which recorder music was prominent. Shakespeare mentions the instrument in Act 5 of A Midsummer Night’s Dream, and introduces it on stage in Act 3 of Hamlet.

On April 8, 1668, the great diarist of the Restoration period, Samuel Pepys, wrote: “[I went] To Dumbleby’s, and did there talk a great deal about pipes, and did buy a recorder, which I intend to learn to play on, the sound of it being of all sounds in the world, most pleasing to me.” This level of praise may seem puzzling to any modern reader who might have had a bad experience of the instrument in primary school. The solution must be found in the context in which recorders were used in earlier times.

For instance, the Australian writer J.S. Manifold, in his 1956 book The music in English drama, from Shakespeare to Purcell, proved that during that period the recorder was used onstage only to signify something divine or numinous. As A. Rowland-Jones summarised, “ … the recorder, with its ethereal and solemn tone, was used almost exclusively in ‘other-world’ contexts – scenes of death, miracles, unearthly joy, or to denote the presence of a Christian or pagan deity. This connotation persisted into the Restoration period, for Pepys provides evidence that the recorder was used in a revival of Massinger’s Virgin Martyr for ‘the wind-music when the angel comes down’. Dryden calls for recorders in Albion and Albanius (1685), an entertainment with many machinefuls of gods in it, and Blow in Venus and Adonis (1685) uses recorders only in connexion with the gods in the opera, and never to accompany the mortals.” i

Given the formerly immense popularity of the recorder in its heyday of about 1500 to 1700, it is legitimate to ask why the instrument declined in status so drastically that it almost became extinct.

As always, there were several factors, but the main one was the rise of the symphony orchestra. The “recorder”, or “English flute”, or “flute d’Angleterre”, was not loud enough to be heard above all the other orchestral instruments. Toward the end of the 19th century it seemed that this quintessential English instrument would soon become extinct. Fortunately, the late-Victorian and Edwardian revival of interest in folk music occurred just in time. (Readers who are grateful for this should pay particular respect to Arnold Dolmetsch, a French-born, but Anglicised, member of a musical instrument-making family.)

Today, recorder-players are still re-discovering the techniques for playing this quintessential English instrument. For instance, the author of this article has three separate books stating that the lowest note possible on the descant recorder is C. That is not true. Modern players have discovered that the B below low-C can be played by half-covering the end-hole of the instrument against the player’s thigh. See:

This entry was posted in Uncategorized.