Wassail in the New Year

As a new-world heathen, you may have found yourself wanting for fellow souls and heathen happenings. In some ways our old ways are still alive in shapes such Yuletide and Easter, but their deep, heathen, folk roots are not well known or understood by many. This is indeed thanks to the Christians who made some headway but in many ways flunked at fully wending Europeans to their Abrahamic drylands ways. They instead had to blend their outlandish ways with our own for them to be taken on. These are trends from the Northern Hemisphere, meant to mark the longest darkest, night, at midwinter, Yule, and the even-night to welcome Spring, at Easter. The name of Yule comes from an older word for “wheel”, marking the turning of the seasons and the start of a new year’s turning. For our Forebears, the winter sunstead marked the start of the new year. The name of the god and holiday of Easter comes from the rising of the sun, in the east. I keep the true English name Easter rather than Ostara lest we lose that meaning. When we mark Yuletide and Easter in the south, it may remind us of where we come from, but it has little to do with our lives in these lands, and the true meaning of the happenings.

There are a sundry of lands in Australia, so it’s hard to mark our forebears’ four yeartides onto much of it. While Australia has temperate lands, it also has drylands and rainforests.  Tasmania, the Apple Isle, is Australia’s southernmost state, with a temperate climate and four true yeartides, much like the northern lands of Europe. Though indeed, our seasons are upside down. Our true Yule, midwinter, falls on June 21st. At this time of the year, Tasmanians celebrate the darkest, longest, and coldest nights of the year with three big festivals, Dark MoFo, The Festival of Voices, and the Huon Valley Mid-Winter Festival. All three include oddities, songs, drinking and stark lights, though one stands above the rest, the Mid-Winter Festival.

English apple farmers tended to wish their trees health, or “wassail” them, each year on midwinter. (“Wassail” comes from a shortening of Old English “wes þu hal”, as in “[be] thou healthy”.) This is meant to help them grow well and bear a lot of fruit for the next harvest. Willie Smith’s is an apple orchard and cider maker in the Huon Valley of Tasmania. While they have been around since 1888, it was only in 2013 that they got together with other nearby businesses to bring in a bigger crowd for the wassailing. The Mid-Winter Festival, although so named, is a bit belated, this year falling on the 14th, 15th, and 16th of July. I went this year for the first time to get a grasp on what it’s truly all about.

Getting to the Festival from Hobart is simple enough, as there were buses running from the city out to the farm in the Huon Valley, and back again at the end of the night. If I’d got in early enough to book a room in nearby Huonville, I might’ve found myself on one of the more often running shuttles to and from the festival. Those coming by car were welcomed with free parking. The bus lead me to the festival at 17:30. After walking about and taking in the cold and the good music coming from all about, my other half and I stopped at the craftsmen’s tent where some women were making bespoke flower headdresses for those who didn’t already bring their own. Almost wherever you went, there was a spot to get yourself a hot mulled cider to keep you warm. (Or for those who don’t drink hard, there’s plenty of hot chocolate.) There were two long food tents, and more food stalls set up here and there, catering for oldtimey English roasted foods, vegetarian dishes, good now-time treats such as pizza and poutine, and indeed sweet eats such as waffles and doughnuts. As the night drew on, everyone gathered in the main yard to see Hungarian Tomas Osvald tell a winter sunstead folk tale, about farmers and the threatened sun, as actors played out the scenes with fire-twirlers and fire-swords. What then followed was the arrow-lit Big Willie wicker man which marked the night. It was a wonderful sight to behold and be a part of. The rest of the night followed with more great folk songs being played on stage, and the occasional small groups of folks who we found playing little tunes as we walked through the crowds. There was a Storyteller’s tent which was sadly filled on Friday with Aboriginal storytelling and lecturing on “the importance of country”. While odd and seemingly out of place, it had little influence on the rest of the festival. The only thing I would have done otherwise was wear warmer clothes!

The Saturday started much earlier, as the buses first arrived at 14:00. My other half and I walked into the gates to find groups of Morris Dancers stepping together and sharing ground, stepping to English folk songs such as British Grenadiers. It was a warm and wonderful welcome. In the day, the storytelling tent was this time manned by the great taleteller Tomas Osvald from the night before who shared some great children’s tales, both old and new. Later in the day were the costume contests. Many of the festival goers were done up in old European clothes, as heathen warriors, as robin hoods, wildermen, or land wights and other odd things. The best donned men and women got cash prizes and a pair of Blundstone boots. Every child that was  donned for the festival was gifted an apple tree. One of the men was done up as “Arwald, last of the pagan kings.” We then took a break to eat and drinks while taking in the songs of the nearby stage. As the sun started to fall, the great bonfire was lit, throwing a wide circle of warmth upon the festival and a great light in the night. Folks then all gathered near it in the main yard where Big Willie was lit the night before, his skeleton still standing over the festival-goers. We were told six thousand of us were there that night. It’s the biggest Wassailing in the Southern Hemisphere. Four apple trees were set upon a platform and on the nearby stage a man donned up like a green land-wight of the woods lead us all in song.  We Wassailed each tree, as they were given a cider-soaked piece of toast for the birds, and a little cider poured on its roots in thanks for the last year’s harvest. 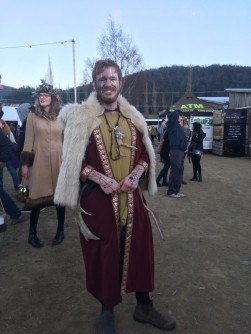 And hoping thou will bear.

The Lord does know where we shall be

To be merry another year.

For to bloom well and to bear well

So merry let us be.

Let every man take off his hat

And shout to the old apple tree.”

And then was shouted,

And hoping thou will bear.

And a little heap under the stairs!”

What followed was lots of shouting, banging pans and anything else you had to make noise. It was a wonderful thing to behold. Take “the Lord” in that song to mean what you will. I take it to mean Woden, leading the gods in their wild hunt through the long nights. Or sing other words, such as, “Gods may know where we shall be…” What then followed were more good folk songs while some scenes were played out on stage in fire-stick pantomime. The night then went on with more drinking and eating, and a Storyteller’s cup. Sadly, the storyteller’s tent was again kicked off by a “traditional owner” of the land who sadly was not the best speaker, and spoke of nothing relevant to the midwinter or folk ways, but instead of “my [Aboriginal] story”.

I did not go to the Sunday happenings as it’s a day for the little ones. There are no buses running to or from Hobart. Instead, kindreds drive down together to pet the livestock and other fun wholesome happenings.

Altogether, it made for a wonderful time. Many seemed to be there only for the drinks and songs as if it were only a music festival. However, whether there to drink in the cider, or the folk soul, everyone ended up a part of the great old heathen folkways. While there were a few small let downs, such as the out of place Aboriginal speakings in the Storytelling tent, it was indeed a great time and a heartening happening. So what say ye? Get yourself down to Tasmania next Midwinter so we can all wassail in the new year together!

Find my writing striking? It’s mostly Roots English! Also known as Anglish, or as Percy Grainger would put it, “blue-eyed English”. It’s English without all the outlandish inflow, owed mainly to the Norman takeover of 1066. It’s truer, steadier, and more meaningful than stock World English.

See the Huon Valley Mid-Winter Festival’s official Facebook Page for lots of great photos and films of the happenings.

If you haven’t already, get yourself a copy of Lynn and Will Rowan’s album of heathen Yule-tide songs, Sing the Sun’s Return.

Their heathen hearth has also put out a book of Yule Songs that go with it.