Caul (pronounced “cowl”) is the national dish of Wales. It is worth taking the trouble to make it well in advance of the day it is to be served, as this allows the full range of flavours to develop.

Step 1: Place 2 litres of water and 2 teaspoons of salt in a large saucepan. Bring to the boil.

Step 2: Peel and add the whole onion and the lamb. Boil again, then use a spoon to skim away the scum from the surface. Simmer for a further 10 to 15 minutes, until cooked through. Using a slotted spoon, remove the meat from the pan. Leave to cool.

Step 3: Cut the meat off the bone and return to the stock.  Peel and cut the swede into 1cm chunks. Add to the pan, boil again, then simmer with the lid on until the swede is tender (about 20 minutes).

Step 4: Peel the carrots and slice at a slight angle into 1cm chunks, then add to the pan. Boil, then simmer until tender.

Step 5: Meanwhile, peel the potatoes and cut into large chunks. Once the carrot has softened, add the potatoes to the pan and simmer until tender.

Step 6: Peel and slice the parsnips, discard the outer leaves from the leeks, then cut into 1cm slices. Add the parsnips and most of the leeks to the pan. Bring to the boil, then simmer with the lid on until tender (about 10 minutes). Taste and season with pepper, then add the raw leeks. Put the lid on top, then place in the fridge to chill for up to 3 days.

To serve: gently simmer the cawl until warm, then ladle into serving bowls. Offer additional black pepper and salt to those who desire it. The traditional accompaniment to cawl is a wedge of mature Caerphilly cheese and a slice of bread and butter. 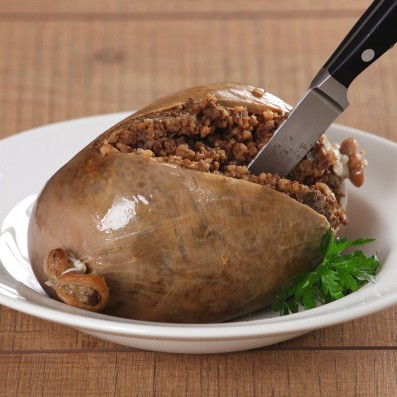 There are lots of different ways of making a Haggis, none of them are definitive. The one here for this recipe is quite simple and easy to do. Feel free to add any extra ingredients that you see fit. Haggis is a traditional Scottish meal that is well worth trying at least once to see what you think of it. Obviously, it is not everyone’s cup-of-tea but it is certainly quite unique. This recipe is very simple and the ingredients are easily obtained from you local butcher’s and supermarket.

230 grams of liver in piece

salt and black pepper (to taste)

Step 1) Boil the liver in a saucepan with just enough water to cover it for 15 minutes.

Step 2) Mince the liver and mince the cooked tripe.

Step 3) Mix all of the ingredients.

Step 4) Make it into a moist dough with some of the liquid in which the liver was cooked.

Step 5) Boil in a pudding cloth for 2 hours or steam in a bowl for 3 hours.

Traditionally served with “nips and neeps” which is turnips and Scotch whisky.

Here is a brilliant video clip on YouTube of the Robert Burns’ “To a Haggis”: https://www.youtube.com/watch?v=qfYFAA4drG4

The above recipe is modeled on one found in the following book: 1972, Traditonal Scots Recipes: With a fine feeling for food, Janet Murray, New York, Bramhall House, page 124.

Guinness – the health drink of a nation 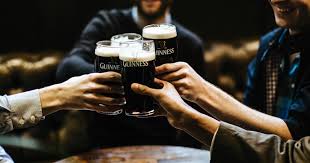 “Guinness is good for you” is a longstanding advertising line.

It turns out that there may be some truth in advertising.

Researchers at the University of Wisconsin have recently established that a pint of Guinness a day is actually good for your health.

The Wisconsin scientists served Guinness to dogs with narrowed arteries. Guinness worked as well as aspirin in preventing clots forming, as antioxidants in Guinness apparently are helpful in reducing cholesterol that otherwise accumulates in arteries.

A pint of Guinness taken at meal time has the best impact.

So, get to it. Drink Guinness and stay healthy!

For readers who dislike the taste of raw Guinness, here’s a recipe that’s bound to overcome any taste objections.

After all, what can go wrong when you combine beer, chocolate, Irish whiskey and ice cream? 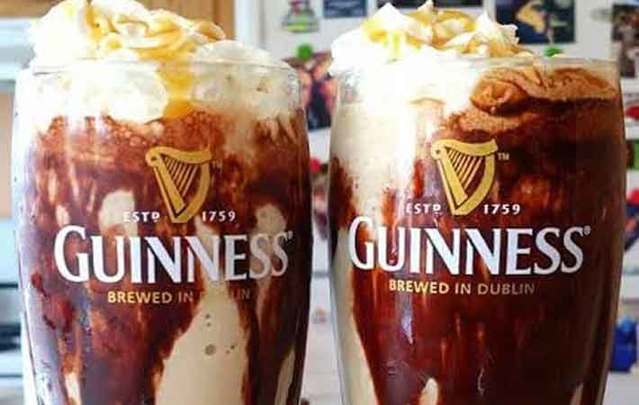 Bangers and Mash – Simple yet delicious!

As a child I had many fond memories of eating ‘Bangers and Mash’. It was always a very hearty meal, especially in winter. Even today, as an adult, it is one of my favourite and easiest meals to cook for family and friends. All you need is a few basic ingredients and it is done. There isn’t anything overly complicated about it. Besides making the mash potato which is pretty simple or maybe your own gravy from scratch. So why are sausages known as bangers? They were given the nickname because after the First World War meat was scarce so sausages had to be made with just meat scraps as well as cereal and water. Because of this the sausages sizzled and spluttered quite a bit when frying them in a pan. These sausages produced noises that were like mini explosions or bangs, therefore the name bangers. The exact phrase of bangers is supposed to go as far back as at least 1919.  The name mash is pretty self-explanatory as well.

‘Bangers and Mash’ is very much a traditional dish of the British Isles and is well known to millions of people. The sausages used in ‘Bangers and Mash’ can range from pork, lamb, beef or a Cumberland sausage. As well as mashed potato, the ingredients would include friend onions, onion gravy, peas and even baked beans. Besides being cooked at home it is also a prime example of “pub grub” which is served at countless pubs, bistros and restaurants. In popular culture, there was even a song recorded in 1961 called ‘Bangers and Mash’ by Peter Sellers and Sophia Loren.  A line in the song goes “No wonder you’re so bony Joe, and skinny as a rake. Well then, give us a bash at the bangers and mash me mother used to make”. Here is a YouTube link to that song for those who like a bit of nostalgia: https://www.youtube.com/watch?v=aGFpVN2xwXU

Keeping with the theme of ‘Bangers and Mash’ I remember watching a wonderful little British cartoon TV show called the very same name when I was growing up.  It was about two naughty chimpanzees named ‘Bangers and Mash’ who were only wanted to have fun, but were always getting into a bit of mischief and causing trouble by making a mess or breaking something. The characters apparently originated from a series of books in schools during the 1980s. I thought it was fantastic when I was little, but it just goes to show how significant the dish of ‘Bangers and Mash’ is ingrained into British culture that a food had a song named after it as well as a cartoon. For those interested I have also included the brief intro of the ‘Bangers and Mash’ cartoon in another YouTube clip here: https://www.youtube.com/watch?v=J_s5ytxFOB8

There are many different ways of cooking ‘Bangers and Mash’ but for convenience sake have included the scan of a recipe from a cook book as shown below:

This book reference is: 1994, Family Circle: Step-by-step English Cooking, ‘Bangers and Mash’, Sydney, Murdoch Books, pages 18-19. For a basic video demonstration on how to cook ‘Bangers and Mash’ I have also included a YouTube link here: https://www.youtube.com/watch?v=186EQzPPHW8

We hope that this recipe for ‘Bangers and Mash’ inspires you to cook this meal for your friends and loved ones, particularly when the months start to get colder. Please feel free to contact us here at Endeavour via Email with recipes or suggestions of British and Australian traditional foods that you would like us to feature in the future.